Search
July 6th, 1952
On a hilltop in the exact geographical centre of Hampton Falls stands a quiet Greek Temple, the meetinghouse of the First Congregational Society (Unitarian) of Hampton Falls. To the East the land slopes down into apple-orchards and pine woods and salt meadows to the open sea. To the north, south and west stand the houses of the men who dedicated it on January 1, 1839. The following week The Exeter News-Letter published the service order, which shows the interest and cooperation of surrounding towns.

The music was under the direction of Mr. Robinson of Exeter and it added much to the interest of the occasion. Suffice it to say - it was GOOD.

The day was fine. The sleighing was delightful and was well improved by the people of the town and all adjacent towns: The lively clink, clink of the sleigh-bells did not cease 'till the house was filled to capacity with its respectable and attentive audience."

This meetinghouse took the place of the earlier building which stood across the road and which was of square New England architecture like the one at Rocky Hill, Salisbury. The new church in form and doctrine marked a new age, a return to the classic beauty of Greece and to the age of reason which claimed that what you could not understand you could not believe. Twenty-nine people formed this society after various groups had left through the years to form the Congregational, Christian Baptist and Baptist Societies. Left with the name, First Congregational Society of Hampton Falls, were the memories and traditions of the first ministers, John and Theophilus Cotton, and most famous, Paine Wingate, later Senator in the first U. S. Congress, and Mr. Samuel Langdon, patriot President of Harvard University, 1774-1783. He lies buried in the old Cemetery on the crossroad and beside him the last fulltime minister, the Rev. A. M.
Bridge. Also were left three silver communion cups presented to the parish by Theophilus Cotton in 1726, and Dr. Langdon's library, willed by him to the Society for the use of its ministers.

The church shared ministers, sometimes with Kensington, sometimes with Exeter or Newburyport 'till, from the nineties on, services were held only on Sunday afternoons in summer. Carryalls and Surreys would line up along the stone wall, the horses wearing nets to keep off green-head flies, and small family groups would enter the great doors. The frescoed walls that seemed paneled, the faded green of carpet and hangings and cushions, the roses on the small white tables by the pulpit all seemed a part of the quiet June afternoon.     ​ 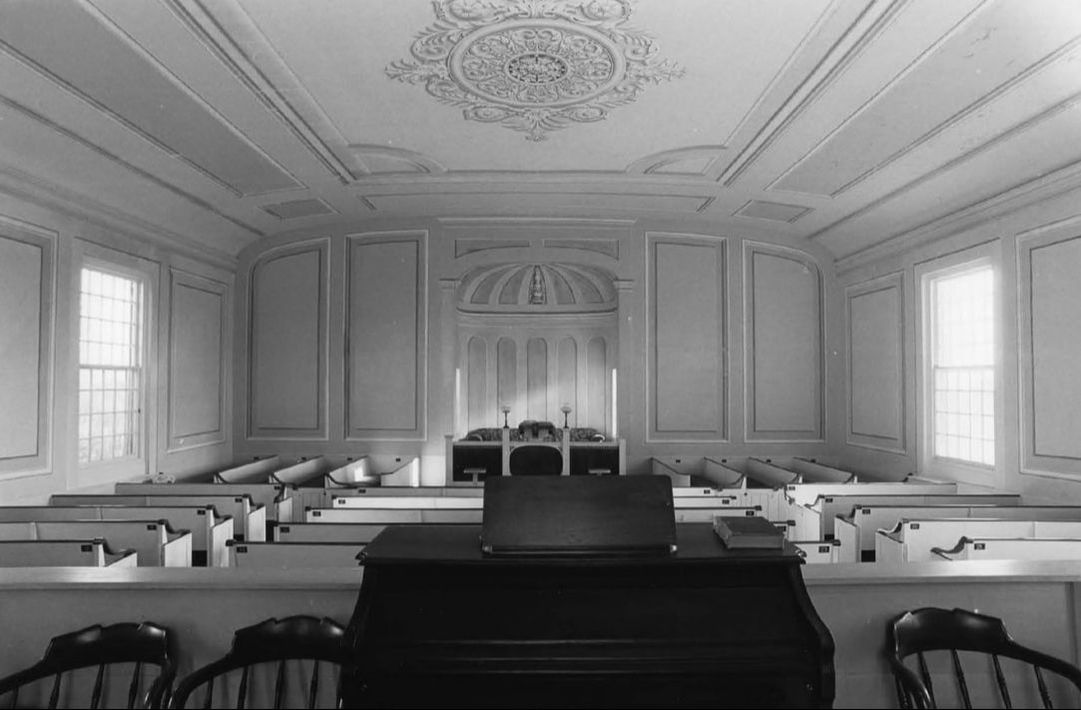 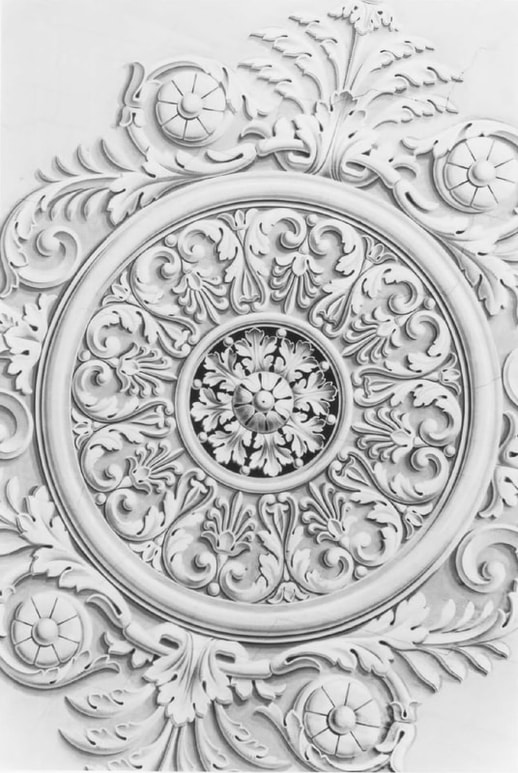 An occasional bee strolled in to taste the flowers, and ladies in black silk and passamenterie fanned tthemselves as the hot wind died down. The choir, often larger than the congregation, sang the hymns, By Cool Siloam's Shady Rill, To Thy Pastures Fair and Large, and Rock of Ages. Earlier voices had been accompanied by General Nason's old bass viol which boomed a heavy accompaniment to the close harmony of the singers. Later a reed organ led the singing. The congregation rose and turned to face the choir during the hymns and children during the long sermons twiddled their thumbs or choosing a long word like exhortation or unrighteousness from the service book spelled out as many little words as the letters gave opportunity. A tortoiseshell cat straying up the aisle, a robin bumbling in and struggling against a window-such things relieved the tedium for the young.

Among the children who sat in these pews were, Ralph Adams Cram, the great Gothic architect, Frank B. Sanborn, the Sage of Concord, and friend of Emerson and Thoreau, and Alice Brown, the author.

The services were quiet, uncontroversial, with a nostalgic tenderness in sermon and prayer. Scents of new-mown hay and valerian drifted in and mingled with the leather smell of Dr. Langdon's Latin and Greek books. On cold days fires would be built in the two box stoves whose block iron funnels ran the length of ocith sides, uniting at the front to pierce the frescoed ceiling to the chimney.
​

Smaller and smaller grew the congregation, and the small inherited fund to support preaching and repairs lost much of its purchasing power as prices advanced. Finally a savage hurricane in 1949 ripped shingles from the roof and the lovely old ceiling with its tromp l'oeil frescoes was stained beyond the power of the funds to repair.

This was a serious loss for this type of frescoing is almost a lost art. Tradition says that itinerant Italian painters of the mid-nineteenth century decorated several churches in this vicinity of which St. John's Church in Portsmouth and this meetinghouse in Hampton Falls have been preserved.

One day a neighbor; Mr. Hervey Kent, seeing a foundation stone askew, investigated and found conditions serious. He engaged the distinguished muralist, Mr. Allyn Cox, of New York to oversee repairs and refrescoing. Broken shades and glass were replaced, foundations were strengthened, pews that had been removed were set back. The roof was reshingled, front steps renewed while carpet and pew covers replaced the worn ones. Mr. William P. Dudley of Exeter, restored the old chair and tables by the pulpit. The members awoke and took pride in their meeting-house and its history. Cram, Sanborn, Brown, Lane, Healey- many
of the old names have gone, but enough are left, with the new names, to promise new life to the old First Parish of Hampton Falls.
-Frances Healey.